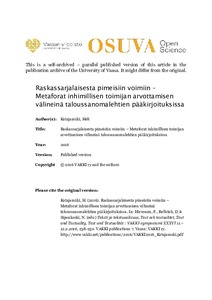 Metaphors can be used to express attitude in texts. This article focuses on attitudinal meanings constructed through metaphors in editorials of two Finnish business newspapers, Kauppalehti and Taloussanomat. Drawing on Martin and White’s Appraisal theory, the meanings invoked by metaphors seen especially as provocations of Judgement, were analyzed. In the analysis, the expressions of judgement were grouped into three meaning categories: ‘capacity’, ‘tenacity’ and ‘propriety’. All categories targeted mainly institutional economic and political actors, like companies and states, but also groups of people (government) and individuals (Tsipras). Political actors as targets were unique in that they referred to human beings (politicians) rather than institutions.