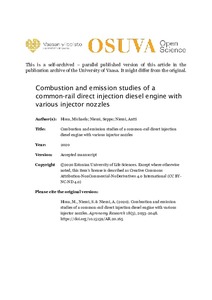 Fuel injection has a critical role in an internal combustion engine and a significant effect on the quality of the fuel spray. In turn, fuel spray directly affects an engine´s combustion, efficiency, power and emissions. This study evaluated three different injector nozzles in a highspeed, non-road diesel engine. It was run on diesel fuel oil (DFO) and testing was conducted at three different engine loads (100%, 75% and 50%) and at two engine speeds (2,200 rpm and 1,500 rpm). The nozzles had 6, 8 and 10 holes and a relatively high mass flow rate (HF). The study investigated and compared injection and combustion characteristics, together with gaseous emissions. The combustion parameters seemed to be very similar with all studied injector nozzles. The emission measurements indicated general reductions in hydrocarbons (HC), carbon monoxide (CO) and nitrogen oxides (NOx) at most load/speed points when using the 6- and 10-hole nozzles instead of the reference 8-hole nozzles. However, smoke number increased when the alternative nozzles were used.