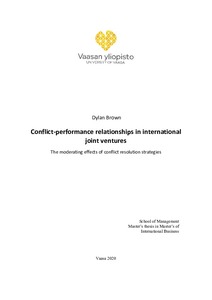 As international business continually becomes more viable for organizations around the world and international joint ventures (IJV) become increasingly more common in the business landscape, understanding what both drives them and hinders them is crucial. Moreover, since IJVs are fundamentally built upon a relationship between firms, comprehending the internal elements of conflict in IJVs and how this conflict affects the performance of these business unions are crucial. Although several studies have studied international joint ventures from a wide variety of different perspectives, no significant studies related to the moderating role of conflict resolution strategies pertaining to the conflict-performance relationship in IJVs have been undertaken.
Thus, this study aims to help shine a light on the moderating impact of four distinct conflict resolution strategies, namely, problem-solving, compromising, forcing, and legalistic, on IJV conflict and the related metric of IJV performance. Accordingly, to help establish a strong literature-based understanding of relevant concepts, the theoretical portion of the thesis literature is reviewed addressing the denotational and conceptual backgrounds of conflict and performance in IJVs and the four aforementioned moderating variables. In this review and analysis of the existing literature, care was taken to ensure that the denotational underpinnings of the key issues of the study, including the relationship undergirding the conflict-performance relationship in IJVs, were thoroughly discussed and analyzed within the context of leading theories and literature in the field of IJV research.
The empirical section of this study features responses gathered from a survey of 89 Nordic IJVs covering questions related to IJV conflict, performance, and each IJVs use of the four conflict resolution strategies. An SPSS regression analysis was conducted to test the five hypotheses formulated about the moderators and gain a better understanding of the nature of conflict and the moderating variables in IJVs. As a part of this analysis, the responses from the Nordic IJVs were divided into smaller subgroups of respondent IJVs that applied certain conflict resolution strategies and those that did not apply the strategies. By conducting the regression analyses and comparing the results between the two subgroups for each of the four strategies, results were calculated that gauged the impact of each moderating variable on IJV performance. Ultimately, the statistical results supported the presence of a negative relationship between conflict and performance in the IJVs observed, supported the positive impact of two moderating variables, and supported the negative impact of two other moderating variables on the dependent variable of IJV performance, thus demonstrating strong evidence in favor of the hypothesized moderating impact of the four conflict resolution strategies.