Macroeconomic Factors and Housing Prices in the Helsinki Metropolitan Area 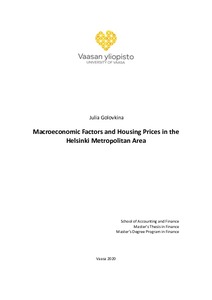 The housing price fluctuations are closely linked to the development of the whole national economy. Macroeconomic changes, which can, to some extent, be impacted by the political decision-making, reflect widely to the functioning of the whole economy as well as to the housing markets. Because the changes in housing prices also affect the development of the macroeconomic factors, the relationship is interrelated. Thus, it is important to understand the drivers that influence housing price formation. Moreover, housing price fluctuations also affect households’ wealth distribution and, hence, their consumption. The phenomenon is also known as the wealth effect.