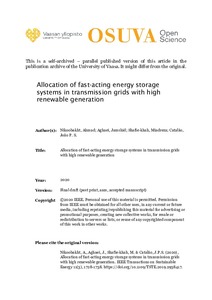 The major challenge in coordinating between fast-acting energy storage systems (FA-ESSs) and renewable energy sources (RESs) in the existing transmission grid is to determine the location and capacity of the FA-ESS in the power systems. The optimal allocation of FA-ESS with conventional hourly discrete time method (DTM) can result in the increased operation cost, non-optimal placements and larger storage capacity and therefore, having an opposite effect on the operation. Accordingly, in this paper, a continuous-time method (CTM) is proposed to coordinate FA-ESS and RESs to cover fast fluctuations of renewable generations (RGs). Besides, based on the CTM, an adaptive interval-based robust optimization framework, to deal with uncertainty of the RGs, has been proposed. The proposed optimal allocation of FA-ESS with CTM provides the best sitting and sizing for the installation of the FA-ESSs and the best possible continuous-time scheduling plan for FA-ESSs. Also, in other to have better implementations of their ramping capability to track the continuous-time changes and deviations of the RGs rather than hourly DTM. The proposed model has been implemented and evaluated on the IEEE Reliability Test System (IEEE-RTS).