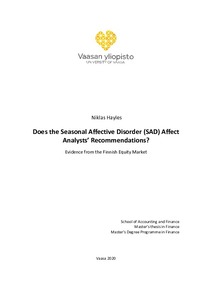 Analysts play an essential role in the stock market as information intermediaries. Prior studies about analysts have primarily concentrated on analysts’ forecast accuracy and abnormal returns. The purpose of this thesis is to investigate whether seasonal affective disorder (SAD), a psychological condition that increases risk aversion and pessimism during autumn and winter seasons, affects the recommendations on Finnish analysts. Thus, SAD studies concentrate primarily on the changes in people’s behavior between seasons.

Previous studies on analysts argue that while SAD should be taken into consideration, there is not a unanimous opinion on whether it has a crucial effect on analysts’ forecasts. This thesis provides further evidence that seasonal affective disorder (SAD) has a significant effect on Finnish analysts’ recommendations. This is done by analyzing the recommendation distributions from 2010–2018. Furthermore, this thesis examines the returns and recommendations of 55 companies from the Finnish stock market between 2010–2018. To test the statistical significance of Finnish analysts’ recommendations, a regression model is run where the announcement market-adjusted return (ANNR) is tested against the firm and analyst specific controls. The SAD variable is then included in the model to test its significance on announcement day returns. Also, three subsamples are constructed to test the impact of upgrades, downgrades, and resumptions to the ANNRs.

Regression results provide evidence that SAD is a statistically significant factor. In nearly every model, the SAD variable is statistically significant. Another interesting finding is that Finnish analysts tend to issue more downgrades during the SAD season than upgrades. This might be because SAD mitigates the optimistic bias, increasing Finnish analysts’ risk aversion and thus prompts them to issue more negative recommendations. Furthermore, the SAD impact was statistically more significant during winter than in fall. However, the response to downgrades is more negative during fall than in winter. This is in line with previous studies, that state that during fall the initial reaction to the seasonal change is stronger than in winter, when the amount of sunlight starts to increase (Kamstra et al., 2003). SAD’s impact to analysts’ forecasts is something that every investor should be aware of. Furthermore, it provides an intriguing subject to conduct future studies upon.