Employee Barriers that Impact the Implementation of New Ways of Working in an Innovation Ecosystem : A Case Study of a Finnish Multinational Corporation 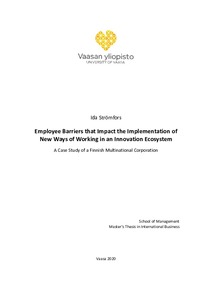 The research on innovation ecosystems have received increasing interest in the past decade. In addition, value creation in the arrangement of innovation ecosystems has gained popularity. Innovation ecosystems are initiated for value co-creation and consist of a variety of actors that are interdependent and interconnected. However, the temporary initial stage of innovation ecosystem creation is still a rather under-researched. Moreover, innovation ecosystems from the perspective of individuals have not yet received adequate attention. Change in organizations is nothing new, yet companies face challenges when new kinds of changes are implemented. The study examines a single case, which is an organization that has initiated the change of establishing an innovation ecosystem. Therefore, the study examines the research gap on innovation ecosystems in the initial phase of creation from an employee perspective. More specifically, the study explores the barriers that employees face in this specific change process, and why. A qualitative research method was chosen for the study and the empirical data was collected by conducting ten semi-structured interviews from the employee point of view. The study followed an abductive research approach and was conducted cross-sectionally. The findings reveal that the main barrier point in the change is in the knowledge stage, which represents the information, training and education on how to actually change. The findings indicate that the barrier is related to factors, such as an unclear understanding of the new way of working, skills and behaviors. Also, the barrier exists due to lack of accessible information on, for example, processes, techniques, systems, tools, roles and responsibilities. Lack of resources, such as facilitators and trainers, is also an impacting factor. The underlying reasons, for this barrier point, are a lack of personalized information and a lack of consolidated information. Other barriers were also discovered in the findings, but they were of a smaller scale.