Why Is CryptoKitties (Not) Gambling? 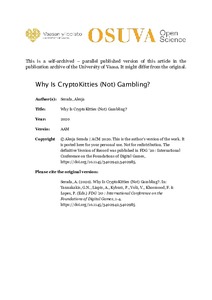 vertaisarvioitu
© Alesja Serada. ACM 2020. This is the author's version of the work. It is posted here for your personal use. Not for redistribution. The definitive Version of Record was published in FDG '20 : International Conference on the Foundations of Digital Games, https://doi.org/10.1145/3402942.3402985.

CryptoKitties (Axiom Zen 2017) is a pioneering blockchain-based game that disrupts the ‘classic game model’ (Juul 2003; 2013) in a way that turns it into a gambling web application. As previous research has shown, its mechanics are almost exclusively based on chance (Scholten et al 2019), and the rest is mostly speculation with game assets (Lee, Yoo and Jang 2019). This raises the question whether this game requires any skill, such as strategic planning. In my case study, I revisit the game system and perform a practice of playing it to differentiate between unpredictable (or “aleatory”, as in Johnson 2018) and decision-making points in the game. I argue that mapping the journey of a player should complement analysis of the game system to assess the balance between skill and chance in a better-informed manner.