A preliminary test for using a borehole as cool storage 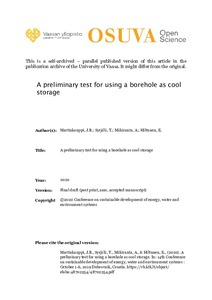 This paper describes a preliminary test for using a borehole as a cool storage. The testing was done using a dry borehole in Vaasa area. The cooling was done using a special trailer in period of 9 days after which the borehole was allowed to warm naturally up. Temperature data was collected both cooling and warming periods. The temperature of undisturbed ground had not reached the original bedrock temperature even after 12 days. The temperature data collected also indicate that one can store cool in a similar way as the heat around a borehole. This test did not cause any visible damage to bedrock that is important when making a cool storage.