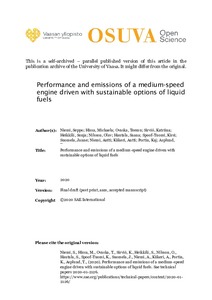 Energy production and transport are major global contributors of greenhouse gas emissions. Both sectors should reduce their use of fossil energy sources. Pollutant emissions must also be reduced without jeopardizing energy efficiency, reliability, and profitability. The internal combustion engine will dominate in marine and power plant applications for a long time because it offers high energy density, efficiency, durability, and the ability to respond rapidly to load changes. Ever-tightening emissions legislation encourages development of new solutions for engine-driven power. One example is exploring the use of alternative fuels in large engines. Low-carbon liquid fuels with high energy density are ideal for applications working far from any infrastructure. This study evaluated how three liquid fuel alternatives perform in a medium-speed engine. One new fuel was a circular economy-based marine gas oil (MGO). The second novelty was a blend of renewable naphtha and low-sulfur light fuel oil (LFO). Neat LFO served as the baseline fuel. The study started with thorough fuel analyses, including the fuels’ ignition properties. Then, a medium-speed engine was driven with each fuel by using similar engine settings and without exhaust aftertreatment. The results indicate that the thermal efficiencies were almost equal for all fuels at all studied loads. No notable differences were observed in the heat release curves. The naphtha/LFO blend produced slightly increased HC emissions at low loads but showed the lowest HC at full load. NOx emissions were very similar with all fuels. MGO and naphtha/LFO blend usually emitted fewer ultrafine exhaust particles than LFO. Methane and nitrous oxide emissions were always very low. Overall, both novel fuels could be adopted for medium-speed engines.