How CSR affects to the cost of new corporate bonds : Evidence from the S&P 500 firms 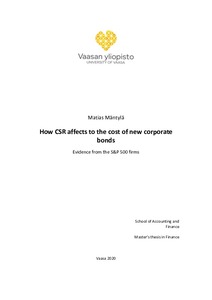 Despite the massive growth of Corporate Social Responsibility (CSR) matters in last decade, there exists no evidence how CSR activities are valued nowadays in the U.S. corporate bond market. This thesis fills the gap by examining the impacts of CSR to the cost of new corporate bonds in the U.S. Four CSR test variables based on ESG scores derived from Thomson Reuters Asset4 -database are used to measure the level of firms’ CSR. After checking availability of all variables, the final sample consists of 417 bonds issued by non-financial S&P 500 companies during 2003–2018. The effect is tested by using pooled OLS regressions with relevant bond- and firm-specific variables.

The empirical results of this study show that all four CSR variables have negative and statisti-cally significant impact to yield spreads during the whole sample period, supporting the risk mitigation theory of CSR. When examining the effect of top and bottom 25% quantiles of CSR variables to yield spreads, High CSR variables report negative and Low CSR variables report positive coefficients. Findings are significant for High CSR and High Social variables and for Low Environmental variable. These results confirm the risk mitigation theory and indicate that lenders reward firms with better CSR activities with lower costs of corporate bonds, whereas weak CSR companies are punished with higher costs of corporate bonds.

The results of this study prove that lenders regard CSR activities from the risk mitigation per-spective and reward firms with better CSR, whereas there are no signs about overinvest-ment consideration in the corporate bond market of the U.S. This encourages companies to invest towards CSR actions as this way they can achieve lower funding costs.