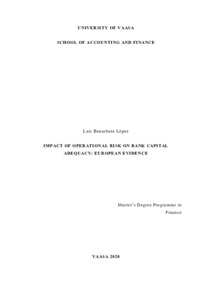 The purpose of this thesis is to study the effect of European banks’ operational risk on
their capital adequacy. Thesis distinguishes between observed data published by the
European Banking Authority and adverse economic conditions compiled in their Stress
tests.
Thesis utilizes a panel dataset of 666 operational losses reported from 21 European
countries between years 2013 and 2018 with a series of explanatory variables to control
for events in the economy and financial indicators. Countries are grouped into regions of
the European Union to control for different characteristics in the European banking
system. Additional tests use econometric techniques and tests for changes in the
qualitative insights during the time period chosen.
Results conclude that there is not a significant relationship between the level of
operational losses and the capital adequacy reported by European banks; heterogeneity of
results is also evident among different regions within European banking system. Rather
than external risks to bank’s operations, financial indicators such as solvency and
liquidity play an important role in the final capital adequacy ratio reported by European
banks. Similarly, operational risk is not found to be driving lower capital adequacy ratio
under financial distress or worst-case economic conditions. By employing robustness
tests and alternative models, these findings are reinforced. Additionally, other risks such
as market and credit have more potential to determine capital adequacy systemic shock.