Why do banks fail? The role of bank-specific and macroeconomic variables 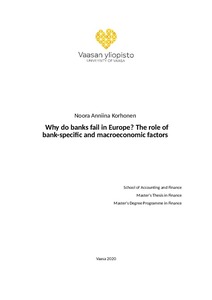 Why do banks fail? The role of bank-specific and macroeconomic variables (407.3Kb)
Lataukset:

The results show that both bank specific and macroeconomic factors are important when forecasting bank failures. Especially size is a highly significant factor and contrast to the "too-big-to-fail", an increase in size increases a probability of a bank failure. Further examining of bank specific variables show that they behave differently over time and certain factors tend to change significantly several years before a failure whereas some change just before a failure. Lastly, even though the analysis shows that a number of predicted bank failures has decreased after the financial crisis, it is not clear whether it is a result of changes in bank regulation and supervision.