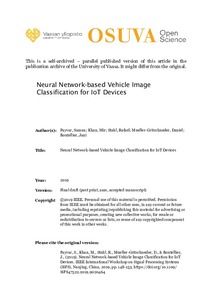 vertaisarvioitu
©2029 IEEE. Personal use of this material is permitted. Permission from IEEE must be obtained for all other uses, in any current or future media, including reprinting/republishing this material for advertising or promotional purposes, creating new collective works, for resale or redistribution to servers or lists, or reuse of any copyrighted component of this work in other works.

Convolutional Neural Networks (CNNs) have previously provided unforeseen results in automatic image analysis and interpretation, an area which has numerous applications in both consumer electronics and industry. However, the signal processing related to CNNs is computationally very demanding, which has prohibited their use in the smallest embedded computing platforms, to which many Internet of Things (IoT) devices belong. Fortunately, in the recent years researchers have developed many approaches for optimizing the performance and for shrinking the memory footprint of CNNs. This paper presents a neuralnetwork-based image classifier that has been trained to classify vehicle images into four different classes. The neural network is optimized by a technique called binarization, and the resulting binarized network is placed to an IoT-class processor core for execution. Binarization reduces the memory footprint of the CNN by around 95% and increases performance by more than 6×. Furthermore, we show that by utilizing a custom instruction 'popcount' of the processor, the performance of the binarized vehicle classifier can still be increased by more than 2×, making the CNN-based image classifier suitable for the smallest embedded processors.