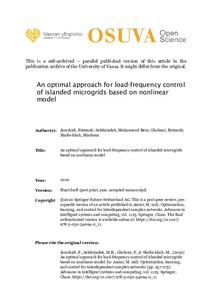 Due to the increased environmental and economic challenges, in recent years, renewable based distribution generation has been developed. More penetrations from the side of consumers caused a new concept called microgrids which are able to stand with or without connection to the bulk power system. Control of microgrids in islanded mode is very crucial for decreasing the amplitude of frequency deviations as well as damping speed. This chapter aims to propose an optimal combination of FOPD and fuzzy pre-compensated FOPI approach for load-frequency control of microgrids in islanded mode. The optimization parameter of the control scheme is designed by the differential evolution (DE) algorithm which has been improved by a fuzzy approach. In the optimization, control effort is considered as a constraint. Due to the robustness and flexibility of the proposed method, the simulation results have been improved substantially. Robust performance of the proposed control method is examined through sensitivity analysis.