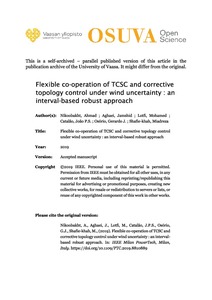 This paper presents an AC optimal power flow (AC-OPF) model including flexible resources (FRs) to handle uncertain wind power generation (WPG). The FRs considered are thermal units with up/down re-dispatching capability, corrective topology control (CTC), and thyristor-controlled series capacitors (TCSC). WPG uncertainty has been modeled through a proposed interval-based robust approach, the goal of which is to maximize the variation range of WPG uncertainty in power systems while maintaining an adequate reliability level at a reasonable cost with the aid of FRs. However, utilization of FRs (especially CTC and TCSC devices) is limited due to the difficulty of their incorporation in the AC-OPF. The optimization framework of the full FR-augmented AC-OPF problem is a mixed-integer nonlinear programming (MINLP) in which the solution for large-scale systems is very hard to obtain. To solve this issue, this paper uses a two-stage decomposition algorithm to decompose the MINLP representation into a mixed-integer linear program (MILP) and a nonlinear program (NLP). Finally, the robust AC-OPF model with FRs is implemented and tested on a 6-bus and the IEEE 118-bus test systems to evaluate its efficiency and performance.