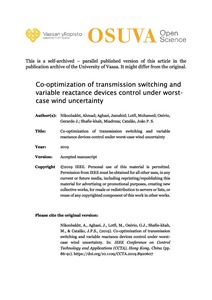 The work reported in this paper jointly addresses two major challenges in modern power systems: 1) systematically maximizing wind power generation (WPG) utilization under worst-case uncertainty and 2) employing mixed integer-nonlinear programming (MINLP) in the co-optimization of variable reactance devices (VRD) and transmission switching (TS) in an AC optimal power flow problem (ACOPF). The first challenge is solved by proposing an interval based robust approach to identify the worst-case WPG uncertainty. Similarly, to overcome the second challenge, a tri-level decomposition algorithm is used to decompose the MINLP representation into one consisting of one mixed-integer linear programming (MILP) and two nonlinear programming (NLPs) problems. Finally, the effectiveness and efficiency of the proposed model is shown by analysing results from testing on the modified RTS-96 system.