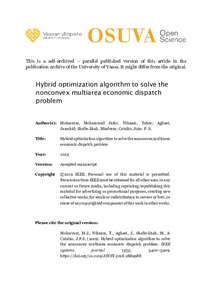 In this paper, multiarea economic dispatch (MAED) problems are solved by a novel straightforward process. The solved MAED problems include transmission losses, tie-line constraints, multiple fuels, valve-point effects, and prohibited operating zones in which small, medium, and large scale test systems are involved. The methodology of tackling the problems consists in a new hybrid combination of JAYA and TLBO algorithms simultaneously to take the advantages of both to solve even nonsmooth and nonconvex MAED problems. In addition, a new and simple process is used to tackle with the interaction between areas. The objective is to economically supply demanded loads in all areas while satisfying all of the constraints. Indeed, by combining JAYA and TLBO algorithms, the convergence speed and the robustness have been improved. The computational results on small, medium, and large-scale test systems indicate the effectiveness of our proposed algorithm in terms of accuracy, robustness, and convergence speed. The obtained results of the proposed JAYA-TLBO algorithm are compared with those obtained from ten well-known algorithms. The results depict the capability of the proposed JAYA-TLBO based approach to provide a better solution.