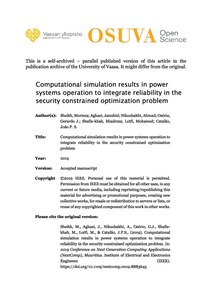 In order to decrease operation costs in a security constrained unit commitment (SCUC) problem, strategies such as transmission switching (TS) can be utilized. However, having no limit for the switching of circuit breakers (CBs) in the system is troublesome, since a high number of switching increases the failure probability and decreases the reliability of a CB, in addition to resulting in shorter CB lifespans and higher maintenance and operating costs. In this paper, the reliability of CBs is integrated into the SCUC problem with TS to limit its switching. Since the higher reliability of CBs will increase the reliability of the system, it can be inferred that the reliability of CBs will affect the amount of load shedding. A linearization method is presented to linearize the CB reliability equation. Also, an improved linear AC optimal power flow (ILACOPF) with dynamic thermal line rating (DTLR) which considers weather conditions is used in the model to further reduce the number of switching. In order to evaluate the suggested approach, numerical testing is performed for 6-bus and large-scale 118-bus IEEE test systems with different scenarios.