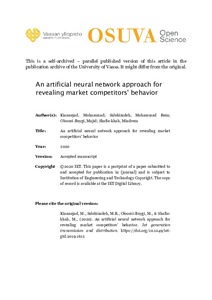 For an electricity market player, obtaining a holistic viewpoint from the behavior of competitors is essential to determine its optimal bidding strategy. This paper proposes a novel approach for modeling and revealing the competitor's behavior from perspective of an intended player (IP). To this end, from perspective of IP, we define an Equivalent Rival (ER) whose behavior in the electricity market reflects the aggregation of behaviors of all individual competitors. It is assumed that IP and its ER participate in an equivalent market which its outcomes are approximately equal to those of the real market. The revealing procedure is designed as a two-stage Artificial Neural Network-based approach to estimate and predict the bids of ER after each run of the real market. Predicted bids of ER are used for the bidding strategy of IP. The proposed approach has been examined on two different case studies. In the first case study the aggregate supply curve of a market with 12 players has been obtained using the proposed approach and the result has been compared with a Bayesian inference approach. In the second case study a six-player electricity market is considered. The competitors' behavior has been revealed from perspective of an intended player using proposed approach and an optimal bidding strategy based on the proposed approach has been constructed. The results have been compared with those of a fuzzy Q-learning based optimal bidding strategy. The superiority of the proposed method in both case studies has been shown.