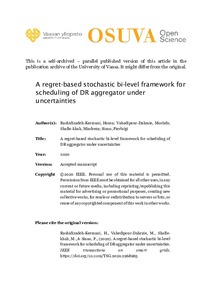 A regret-based stochastic bi-level framework for optimal decision making of a demand response (DR) aggregator to purchase energy from short term electricity market and wind generation units is proposed. Based on this model, the aggregator offers selling prices to the customers, aiming to maximize its expected profit in a competitive market. The clients’ reactions to the offering prices of aggregators and competition among rival aggregators are explicitly considered in the proposed model. Different sources of uncertainty impressing the decisions made by the aggregator are characterized via a set of scenarios and are accounted for by using stochastic programming. Conditional value-at-risk (CVaR) is used for minimizing the expected value of regret over a set of worst scenarios whose collective probability is lower than a limitation value. Simulations are carried out to compare CVaR-based approach with value-at-risk (VaR) concept and traditional scenario based stochastic programming (SBSP) strategy. The findings show that the proposed CVaR strategy outperforms the SBSP approach in terms of making more risk-averse energy biddings and attracting more customers in the competitive market. The results show that although the aggregator offers the same prices in both CVaR and VaR approaches, the average of regret is lower in the VaR approach.