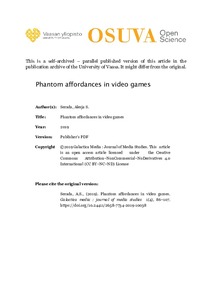 In this paper, I am looking for the common ground to judge video game’s formal qualities, such as its interface, the rule system and game goals, which would include and explain both intentionally and unintentionally subversive games labeled as ‘bad’ and ‘not games’. I start with two cases of games that subvert expectations to the degree when players actively refuse to recognize them as games. Such games have inspired a variety of research and critique, but there is surprisingly little agreement on what makes them “bad” or subversive, as opposed to typical genre-conforming violent games, which are supposed to be subversive or “bad” but rarely produce the same disruptive experience. Relying on existing analysis of subversive and violent games, I apply usercentered, goal-oriented approaches of UX design (Norman, 1998; Cooper, 2007) to games and complement this framework with a new category, ‘phantom affordances’: perceived formal properties of a game that actively afford an action but do not deliver the expected outcome. This category can be productively applied to describe and design subversions in games.