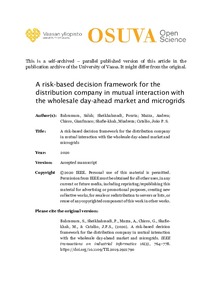 One of the emergent prospects for active distribution networks ( DN ) is to establish new roles to the distribution company ( DISCO ). The DISCO can act as an aggregator of the resources existing in the DN , also when parts of the network are structured and managed as microgrids ( MG s). The new roles of the DISCO may open the participation of the DISCO as a player trading energy in the wholesale markets, as well as in local energy markets. In this paper, the decision making aspects involving the DISCO are addressed by proposing a bilevel optimization approach in which the DISCO problem is modeled as the upper-level problem and the MG s problems and day-ahead wholesale market clearing process are modeled as the lower-level problems. To include the uncertainty of renewable energy sources, a risk-based two-stage stochastic problem is formulated, in which the DISCO 's risk aversion is modeled by using the conditional value at risk. The resulting nonlinear bilevel model is transformed into a linear single-level one by applying the Karush–Kuhn–Tucker conditions and the duality theory. The effectiveness of the model is shown in the application to the IEEE 33-bus DN connected to the IEEE RTS 24-bus power system.