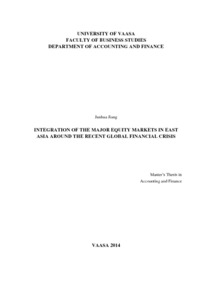 This study investigates the integration of the stock markets in the US, Japan, Hong Kong and Mainland China before, during and after the subprime crisis. The data included cover the time period from January 2004 to October 2013. Both the data in local currency and the data in the common currency of US dollar are analyzed in the study.

In this thesis, Johansen cointegration test, Granger causality test, the method of variance decomposition, and the newly proposed spillover indexes of Diebold and Yilmaz (2012) are utilized to study the cross-market connections of the four stock markets. The cointegration tests indicate that the financial crisis has temporarily strengthened the long-term linkages of the stock markets. The Granger causality tests show that the impact of the Asian stock markets on the US market during the crisis is larger than that of the pre-crisis period. The variance decomposition suggests that the interdependences of the selected stock markets are stronger during the crisis period and the increased inter-linkages of the markets do not sustain after the crisis. The spillover indexes further confirm that more intense cross-market spillovers occurred during the crisis period.