Hedging in Immigration Discourse: A Comparative Study of French and Swedish Radio Debates 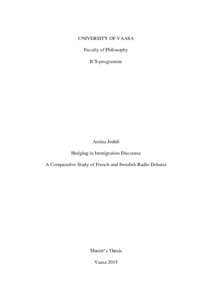 Migration is an important aspect of multicultural societies and globalization. It is a topic of discussion in the public sphere, in academic literature, and in the media. The link between the media and migration has been researched extensively by analysing representations of migration in the media. Migration is a controversial topic, especially in debates where speakers are expected to elaborate on their personal views. Debates on the role of migration on television and on radio, for instance, differ in political, cultural, and national contexts.

A linguistic tool used by speakers to avoid seeming too straightforward or too direct in their discourse is the use of hedges. Hedging is a linguistic means to soften a statement or to make a statement vaguer and more ambiguous. This phenomenon was first described by Lakoff (1972), and was later adopted by Brown and Levinson (1987) in their theory on negative politeness. Hedging is mostly used in contexts where speakers want to distance themselves from their statements or want to make their statements less straightforward. Hedging can be done in several ways, such as the use of certain verbs, adverbials, or adjectives.

This thesis analyses hedging in a French radio debate and a Swedish radio debate on immigration. Applying discourse analysis, the placement of the hedges and their functions are analysed. The hedges chosen for analysis include epistemic modality (je crois and je pense in French, jag tycker, jag tror and jag tänker in Swedish), the modal verb ‘would’ or the conditionnel présent (je dirais and je voudrais in French, and jag skulle säga and jag skulle vilja in Swedish), and hedging adverbials (en quelque sorte, vraiment and en fait in French, and någon/något slags, verkligen and faktiskt in Swedish), as these hedges occur frequently. The analyses illustrate the different functions that the hedges have, and the comparative analysis demonstrates differences in the number of occurrences, the placement of the hedges and the functions of the hedges.