Niṣkāmakarma : a philosophical analysis in light of the prisoner's dilemma and the concept of degrowth 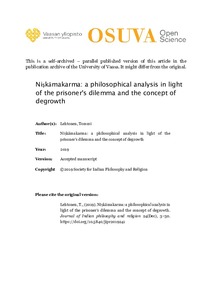 The prisoner's dilemma famously shows that individuals seeking their own benefit end up with a worse outcome than could be achieved through cooperation. This dilemma provides an effective but neglected method for the study of the Hindu principle of "desireless action" (niṣkāmakarma). In the context of the prisoner's dilemma, one or the other of the following decision-making strategies is feasible for prisoners who want to follow the principle of "desireless action": (1) to be indifferent and to leave the decision to chance (e.g. by arbitrarily drawing lots) or (2) to pursue the common good or the benefit of the other (by remaining silent) instead of seeking primarily to benefit oneself (by confessing). The second strategy is more appropriate assuming the following: the followers of the principle of "desireless action" can be goal-oriented and target-driven, as long as unselfish goals are considered, while remaining indifferent and non-attached in terms of personal benefit. This interpretation is tested and further discussed in this article in light of the values of the modem environmental and anti-consumerist degrowth movement. A non-profit orientation and the emphasis on duties are shared by the concepts of degrowth and niṣkāmakarma. Social- or reality-centredness rather than self-centredness is also common to both concepts. The degrowth movement focuses on economic contraction and deceleration, and thus its scope is narrower and more specific than that of niṣkāmakarma. Moreover, the degrowth movement rejects economic grovrth because of its ecologically and socially harmful effects, such as pollution and income inequality, but it is - at least in theory - indifferent to the harmless results of economic activities. On the contrary, the principle of niṣkāmakarma involves a critical stance toward both good and bad results of actions, insofar as they are pursued because of self-regarding desires.