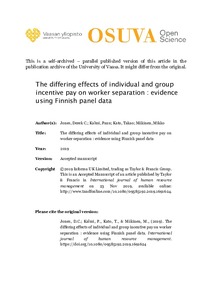 We investigate the role of individual incentive (II) and group incentive (GI) pay as determinants of worker separation using a large panel data set from Finland during 1997–2006. For white-collar workers, GI pay is associated significantly with an increased probability of separation (diminished employment stability), but in large firms only. For blue-collar workers, II pay is associated with a decreased probability of separation (enhanced employment stability), in both small and large firms. By providing results for different forms of performance pay in a single study, some of our findings are novel. In accounting for differences in our empirical findings compared to those in earlier studies, our results suggest that outcomes depend on the differing institutional contexts found in coordinated market economies (such as Finland) and liberal market economies.