Risk-taking of the European Banks in CEECs : The role of national culture and stake vs shareholder view 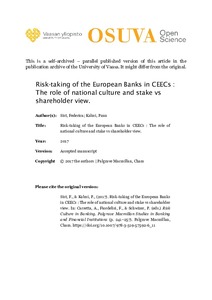 The European bank system needs to consider the openness of markets of Central and Eastern European countries (CEECs) above other forces among which competition, crises and regulation. This chapter has the aims to understand the impact of national culture on risk-taking by European banks with branches and subsidiaries in CEECs as well as the ownership effects (shareholders, stakeholders). The sample is composed of 328 Eastern European banks in 13 countries and data are from Bankscope. The two measures of culture individualism and power distance affect significantly the risk-taking measured by z-score, while EBRD index records a positive relation. The results on SHV and STV suggest that banks with cooperative BHCs in CEECs have the same behaviour as commercial banks in facing cultural characteristics of a host country.