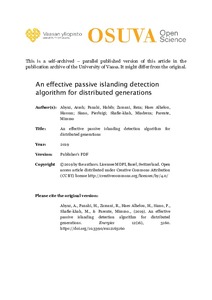 Different issues will be raised and highlighted by emerging distributed generations (DGs) into modern power systems in which the islanding detection is the most important. In the islanding situation, a part of the system which consists of at least one DG, passive grid, and local load, becomes fully separated from the main grid. Several detection methods of islanding have been proposed in recent researches based on measured electrical parameters of the system. However, islanding detection based on local measurements suffers from the non-detection zone (NDZ) and undesirable detection during grid-connected events. This paper proposes a passive islanding detection algorithm for all types of DGs by appropriate combining the measured frequency, voltage, current, and phase angle and their rate of changes at the point of common coupling (PCC). The proposed algorithm detects the islanding situation, even with the exact zero power mismatches. Proposed algorithm discriminates between the islanding situation and non-islanding disturbances, such as short circuit faults, capacitor faults, and load switching in a proper time and without mal-operation. In addition, the performance of the proposed algorithm has been evaluated under different scenarios by performing the algorithm on the IEEE 13-bus distribution system.