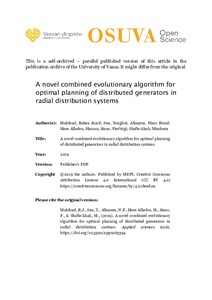 In this paper, a novel, combined evolutionary algorithm for solving the optimal planning of distributed generators (OPDG) problem in radial distribution systems (RDSs) is proposed. This algorithm is developed by uniquely combining the original differential evolution algorithm (DE) with the search mechanism of Lévy flights (LF). Furthermore, the quasi-opposition based learning concept (QOBL) is applied to generate the initial population of the combined DELF. As a result, the new algorithm called the quasi-oppositional differential evolution Lévy flights algorithm (QODELFA) is presented. The proposed technique is utilized to solve the OPDG problem in RDSs by taking three objective functions (OFs) under consideration. Those OFs are the active power loss minimization, the voltage profile improvement, and the voltage stability enhancement. Different combinations of those three OFs are considered while satisfying several operational constraints. The robustness of the proposed QODELFA is tested and verified on the IEEE 33-bus, 69-bus, and 118-bus systems and the results are compared to other existing methods in the literature. The conducted comparisons show that the proposed algorithm outperforms many previous available methods and it is highly recommended as a robust and efficient technique for solving the OPDG problem.