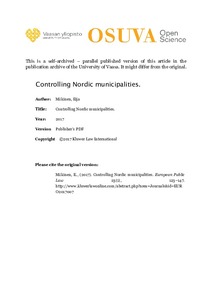 This study has partially been financed by The Swedish Cultural Foundation of Finland. The aim of this article is to show how local governments in the Nordic countries are controlled by the state and the citizens. These countries have a strong local self-government and all of them are welfare states highly ranked in international comparisons. The main research question is what kind of differences and similarities there are in the legal control mechanisms and competences between the states. How do the various control methods fit in the European Convention of Local Self-Government? In comparative law, Nordic countries are often said to form a family of their own; but it is also possible to speak about the Eastern and Western models. This distinction can be seen in this article. The similarities between Norway and Denmark make it possible to speak about grouping (the Western group) and the similarities between Finland and Sweden justify speaking about another group (the Eastern group).